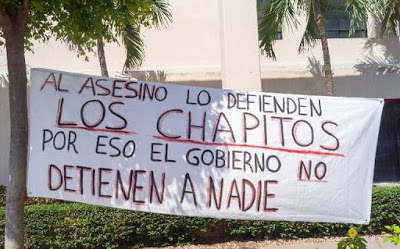 Culiacán, Sin.- It is not the
first time that Claudia arrives at the foot of the five-story building and protests.
This time, as on other occasions, she arrived at the Attorney General’s Office
at midmorning and without any help, alone with her courage and thirst for
justice, she hung up four banners claiming that the person responsible for the
murder of her 22-year-old son Irving, be arrested.

One of them, the last one, this
time drew attention: “The murderer is defended by Los Chapitos, so the government
will not arrest (sic) anyone.”

In a city where organized crime
seems to rule, this statement sounds suicidal. People know it, and that is why
several vehicles stop to take pictures of the banners. The same is done by the
agents of a patrol of the State Preventive Police and even an element of
Municipal Transit.

From the front, two young people
in a Jeep Cherokee truck seem to be watching, they take photos with their cell
phones, they observe what the matter is about …

When Claudia is asked if this
banner will not cause her problems, she begins to cry lonely tears that swell
in her blond eyes behind that face full of freckles: “I am willing to be
killed to solve things”, declares.

It is said she is tired,
devastated. “They already took my life from me once when they killed my son,
they can’t do anything else to me,” she says.

However, she tells the story of
how her son Irving was murdered. It happened on June 16, 2017 when he was
driving a Nissan Versa through the Chapultepec neighborhood. The young man was
an Uber driver and left a pregnant girlfriend.

Now the girl is going to be 3
years old and Claudia longs to meet her. But she left after everything
happened.

It indicates that the
Prosecutor’s Office, since then, has tried to clarify the case by presenting
the version of a murderer who was already dead. In the crowd of words, she
tries to explain that now there is an arrest warrant against an alleged
perpetrator that she does not recognize.

“They want to place blame on
another person, when I have already said who is responsible,” she says. In
the banners  she points out to the deputy
prosecutor of the downtown area, Miguel Ángel Valdez Zazueta, to the public
ministry of homicides and the Investigative Police to protect those responsible
for the crime.

I did not come in La Primavera,
nor do I have family members to support me, even my stepfather is helping them
with their lies. It has been 3 years, 3 months and 19 days.

-Why the children of El Chapo?

“The person in charge who
does not want to investigate in the Prosecutor’s Office is a friend of them, it
is the authority they should ask,” said Claudia.

Claudia stayed until 1 in the
afternoon. She says her solitary protest will continue, because all she demands
is that justice be done for her son Irving.

“They will surely say that I
am crazy, because in Sinaloa mothers who demand justice for our murdered or
disappeared children always say the same thing: This woman is crazy.”