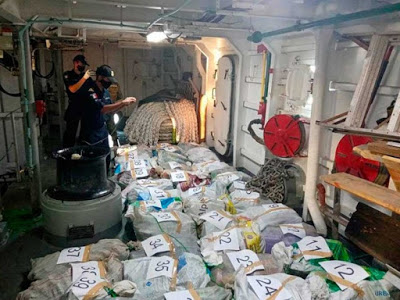 Elements assigned to the
Fourteenth Naval Zone of the Secretariat of the Navy-Navy of Mexico (Semar),
located and seized 39 sacks of cocaine off the coast of the State of
Chiapas.weighing more than 850 kilos. Black market value amounts to 190 million
900 thousand pesos.

Intelligence work through which
it became known of a smaller Go Fast vessel that was carrying alleged illicit
cargo, which was sailing 150 nautical miles south-southwest of Puerto Chiapas.

From the Command and Control
Center of the Mexican Navy, the command of the Fourteenth Naval Zone was
instructed to immediately deploy personnel and units for the optimal maritime
and air surveillance patrol to combat the situation. Surface units such as
Oceanic, Coastal and Interceptor Patrol participated, as well as a Persuader
type aircraft and an MI-17 helicopter with Marine Corps personnel on board.

Upon arrival at the site, the
Persuader aircraft, through search and location maneuvers, sighted drifting
packages, for which the Oceanic Patrol was ordered to deploy its embarked
Interceptor Patrol, thus achieving the recovery and securing of 39 bags that
were floating, containing inside rectangular brick-shaped packages with white
powder of suspected cocaine hydrochloride.