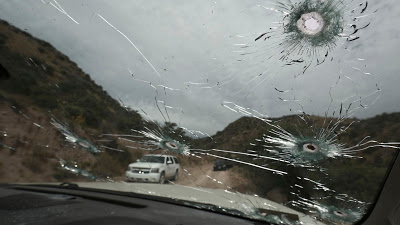 By Buggs for Borderland Beat

Mexican State authorities have blamed La Línea, the armed wing of the Nuevo Cartel de Juarez as the criminal group responsible for the execution of six children and three women from the Mormon community LeBarón on November 4, 2019. After the LeBaron massacre, violence erupted in Chihuahua, particularly in Ciudad Juarez. Public transportation buses were being burned in the streets of Juarez by Los Mexicles (Street gang allied with CDS) in daylight hours, sometimes with people inside, in attempt to heat up the plaza (no pun intended). This is a cartel tactic “calentando la plaza,” meant to put heat on La Línea, who control Ciudad Juarez. The Mexicles, a street gang that has presence in the streets and prisons of Juarez started targeting members of La Línea. Ten members of La Línea were executed in el cereso (jail) in Juarez during the same time.

I was fortunate enough to be able to take a tour of hot spots in the streets of Juarez and el cereso during these times of violent activity. Word on the streets was that El Mayo Zambada (old school boss of CDS) was not very happy with the increase of violence in the neighboring state of Sonora and the attention the LeBaron massacre was generating, in particular the direct intervention by the US. This might have been the cause in increase of violence in Ciudad Juarez, the epicenter of La Línea, who were being hunted down

But now that things have settle down some, La Línea has continued with their criminal activities, literally in the whole state of Chihuahua. 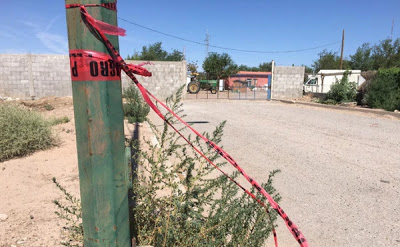 Even in the municipality of Namiquipa, Chihuahua, no businesses are saved from having to pay a fee (pago de piso) And it is La Línea that has exponentially increased extortion of businesses in these towns, mostly in rural regions.

Out of fear, most business owners pay, although the payment of this fee does not guarantee anything. La Línea hitmen executed a couple from Bavispe, Sonora, who moved to the Chihuahuan municipality of Janos to buy gasoline and resell it in their town.

I have seen this practice in this region before, as the Sonoran mountain towns that border the state of Chihuahua there are no gas stations. It is the local people themselves who supply the fuel, even to the vehicles of the municipal police. 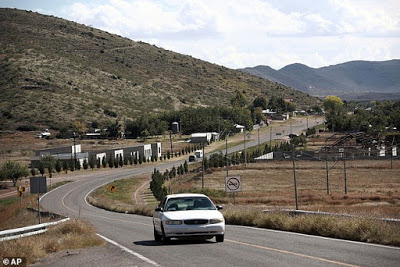 But for the journey through the region, the fuel provided by private citizens can be economical. In Janos, Chihuahua, the liter of gasoline magna goes for about 14 pesos (.56 cents), while in Sonora it can be purchased for about 20 pesos (.79 cents). In Baserac, located just 15 kilometers away from Bavispe, the liter of fuel sells for 22 pesos (.87 cents) a liter.

La Línea knows about these people selling fuel in the black market and charges 800 pesos ($31 dollars) per “tambo” (tambo is a barrel that can carry up to 200 liters or 52 gallons of fuel) to the locals of the Sonoran Sierra who come to supply the Chihuahuan municipalities.

“They were killed like dogs for stealing 80,000 pesos ($3,174 dollars) and the truck. The two people with four children, were not gangsters, they were ejidatarios (landowners), with little cattle, but they sold gasoline to make ends meet. The gasoline was not stolen. I bought some in a small community known Pancho Villa, in the municipality of Janos,” said Adam Langford, former mayor of Bavispe and member of the Mormon community LeBarón, in Sonora.

Langford denounced the local authorities in both Sonora and Chihuahua, with whom he has met.

“How are you going to compete with that cartel that charges everyone a fee, they have more money than the state government and they have better weapons,” he was critical of the Governor of Sonora Claudia Pavlovich.

The Mennonite community has also been a victim of this excessive increase in flat fees (pago de piso). 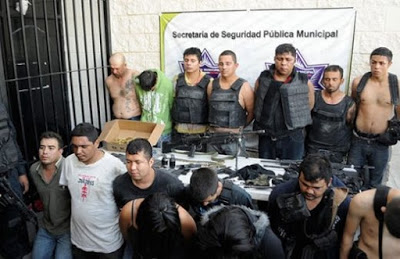 The Juárez cartel and its armed wing La Línea were alleged to have been involved in the largest massacres that have occurred in the country in the last 13 years.

Since, from the time of Felipe Calderón’s six-year term, Ciudad Juárez, Chihuahua, has been the area where the bloodiest battles between La Línea and the Sinaloa cartel were generated for control of that border region in to the United States for the trafficking of drugs.

Today, La Línea continues to defend the chihuahua state territory from the Sinaloan groups identified as Gente Nueva, Los Jaguares and Los Salazar, who control the states of Sonora and Durango, and who have also entered Chihuahua, where Los Jaguares have managed to take control of Dolores, Madera, El Largo and Benito Juárez.

While in the towns of Temósachi, Ignacio Zaragoza and San Buenaventura, there is a dispute over control between La Línea and Gente Nueva. La Línea still maintain control of Nueva Casas Grande, Galeana, Namiquipa, El Terrero, Guerrero, Tomochi and La Junta.

Meanwhile, the state border of Sonora is controlled by Gente Nueva, headed by Ruperto Salgueiro, El 37, brother of Noel Salgueiro, El Flaco, founder of the cell and who was arrested in 2011.

The area is also controlled by Los Salazar and Los Jaguares, the latter led by Francisco Arvizu, El Jaguar (Not to be confused with José Antonio Torres Marrufo “El Jaguar” a Sinaloa Cartel operative that was extradited to the US.).

I am working on a story in which a man that lived in the city where I am from was deported to Ciudad Juarez and was killed a month ago in Nueva Casas Grandes (NCG) because there was $200,000 missing. Arvizu El Jaguar probably ordered the hit (that was the boss of the man killed in NCG) and the money disappeared. The man killed, who I will not identify at this time, was buried here in the city where I am from two weeks ago.

In this fight, the gangs of Los Mexicles and Los Artistas Asesinos (Doble A or AA) have joined forces with Gente Nueva.

Likewise, it is known that a hitman from La Línea nicknamed El 15 has control of Nueva Casas Grande, Galeana, Namiquipa, El Terrero, Guerrero, Tómchi and La Junta, and responds to Roberto González, El Mudo or El 32.

The head of La Línea, El Mudo, maintains influence near Madera, Ignacio Zaragoza, Galeana and San Buenaventura, that recently has been in the hands of Gente Nueva. Casas Grandes is near Bavispe, where the LeBarón members were massacred.

Authorities commented that Ciudad Juárez is currently divided between La Línea – founded by Juan Pablo Ledezma, El JP, who is presumed to have died in a confrontation – and Gente Nueva.

In 2010, a Segob (Mexican Secretariat for Home Affairs) report detailed the clashes were the product of long-standing family rivalries and betrayals between the Carrillo Fuentes and El Chapo, then leader of the Sinaloa cartel, as well as for the control of Juárez, a strategic drug trafficking border port in to the US.

In four years of war, the fight has generated 8,236 homicides, the majority in Chihuahua, representing 36 percent of executions in the country.

US Treasury Looks at Modernizing its Economic Sanctions

October 20, 2021Comments Off on US Treasury Looks at Modernizing its Economic Sanctions

US Treasury Looks at Modernizing its Economic Sanctions

October 20, 2021Comments Off on US Treasury Looks at Modernizing its Economic Sanctions
Advertise Here for only $299 mo.
Unlimited cpc
Adspace ID5

Romance Down Under Blooms in “Kangaroos and Champagne”