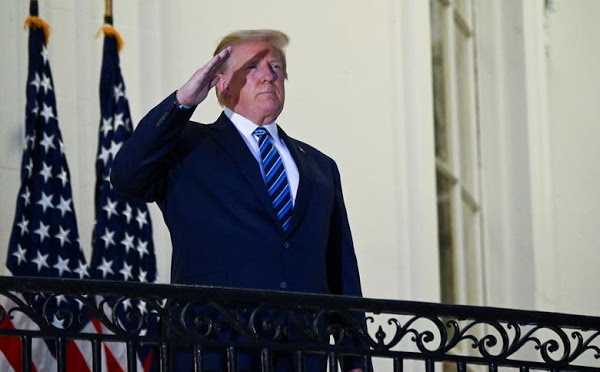 President Trump salutes as he poses without a face mask on the Truman Balcony of the White House after returning from being hospitalized, October 5. REUTERS/Erin Scott
It didn’t take long for this election’s first official October surprise to occur. Less than 22 hours into the new month, President Donald Trump tweeted that he and his wife, Melania, had tested positive for COVID-19.
That came just five days after a late September surprise, publication of a newspaper report with private details from Trump’s income taxes, showing that he avoided paying large sums of income taxes in recent years, legally but politically damaging nonetheless.
Who illegally released private IRS tax records remains an unanswered question. But just hours later, if you can believe it, Democrats were running TV ads about it.
Before that came a videotape with former Vice President Joe Biden appearing to call members of the military “stupid bastards.”
And you can pretty much count on more such attempts to influence the November presidential election’s outcome, although the sources will likely be masked to make verification difficult.
WNU Editor: I am not an American, but I have been closely watching US Presidential elections since 1980. This election is the first election that I have seen where the entire media and Washington political establishment are unified in their opposition to one Presidential candidate. I would even add the national security/military establishment being opposed to this Presidential candidate, as well as Hollywood, the tech barons, Wall Street, and a good chunk of the Republican Party itself. The polls themselves are indicating a massive Democrat tsunami where they will win the White House, and super majorities in the Senate and the House of Representatives. So why is it that none of these groups sound like winners? Why is their confidence absent? Why is the anger and hate against President Trump only increasing, when you would think that everyone would be smiling and happy and laughing at the President’s miscues and self inflicted wounds? Is it because every poll that has been done are consistent in saying that the majority of Americans still believe that President Trump will be re-elected? Is it because President Trump does not sound like he has given up? Is it because they know that on the issues a majority of Americans agree with President Trump? This has truly been an incredibly eye-opening election cycle. We are witnessing how Washington works, and more importantly, how Washington views all of us. As to what is my take on the President’s chances. Before the pandemic President Trump was cruising to re-election on the strength of the economy. No more now. The economy has been shattered, and tens of millions of Americans are hurting. The Democrats have exploited this hurt and fears of the future very effectively, and made this election a referendum on President Trump, while masking their own policies and promises. President Trump has also helped the Democrats and his opponents by making this election primarily about him, and not about his opponent and what he and his supporters would do if elected. In this environment I would say that President Trump is going to lose. The interest groups and power brokers that count are overwhelmingly against him, and they are very good at destroying their opponents. But what sets me back is what the people who I trust are telling me. They are convinced that President Trump is going to win, and will vote accordingly. And what is even more shocking to me is that my American friends, who are mostly progressives, are thinking the same way. As I said earlier in my post. This has been an eye-opening election. My head is telling me that President Trump is going to be wiped out on November 3. My heart says he is going to be re-elected.