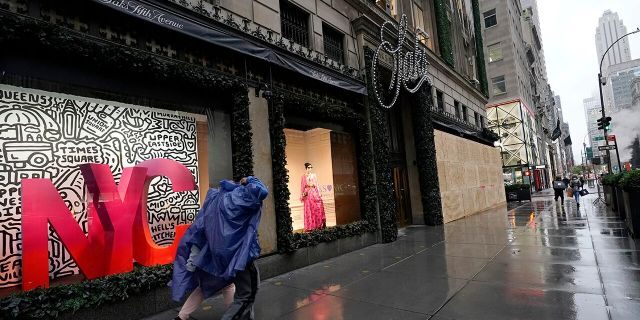 Business owners and operators in some parts of the nation are paying big bucks to hire private security to guard their buildings and offices in the event of any potential unrest following Election Day, experts and officials said Tuesday.

Former federal law enforcement officer David Katz, who now owns a New York-based security firm, said clients have recently sought advice for how they should prepare for any potential riots or looting that could break out as results from the 2020 Presidential Election trickle out.

“I said physical security is first. Board up,” Katz, founder and CEO of Global Security Group, Inc., told Fox News on Tuesday. “And understand that you’re going to be facing people who will bring tools to this party. No nails, screws … something very substantial there.”

Katz said the cost of hiring private security to stand guard outside businesses and buildings could reach up to $2,500 to $3,000 per hour, depending on size and scope of the job.

Most guards, many of whom are retired law enforcement, might typically be paid $30 to $40 per hour for an assignment, but given the circumstances could instead be paid as much as $60 an hour, Katz said. In turn, he said would have to bill nearly $100 per hour, per guard, just to turn a profit.

Recalling one conversation he had with a client, Katz said he told the person he would be better off hiring only a handful of guards to keep watch from inside the building, and protect the exterior using wooden boards and even draping.

The exterior protection needs “to be a substantial impediment because at some point the police will come and try to break it up,” Katz said, “We have to kind of just batten down the hatches and wait for the police to continue to restore order, and hopefully they’ll be on top of it.”

He denied any concerns that boarding up buildings might incentivize looters to target, saying instead that they’re “incentivized by the contents.” 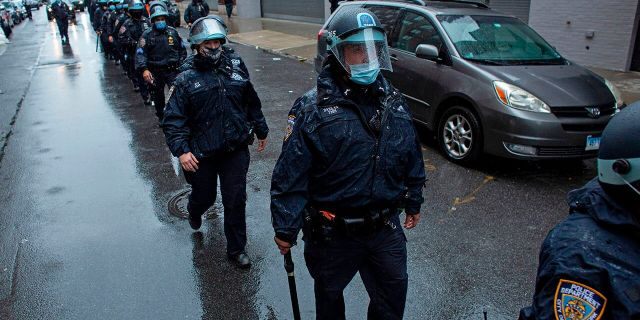 On Tuesday morning, New York City Police Commissioner Dermot Shea told local cable news channel, Spectrum NY1, the decision for retailers and companies to board up is “a 100% precautionary on the businesses.”

“It’s hard to fault them,” he said, “with what we went through and what they see happening across the country.”

As of 3 p.m., NYPD officials said they had received no information of threats or major incidents citywide, but the department is prepared just in case.

Shea said during the morning interview that the NYPD had “zero information that we’re expecting anything like” what the Big Apple saw during the summer months, following the police-involved death of George Floyd in Minneapolis.

“To all New Yorkers: the police officers are out there today in force,” he said. “They’re going to have zero tolerance for it.”

Similar scenes are playing out on the West Coast. 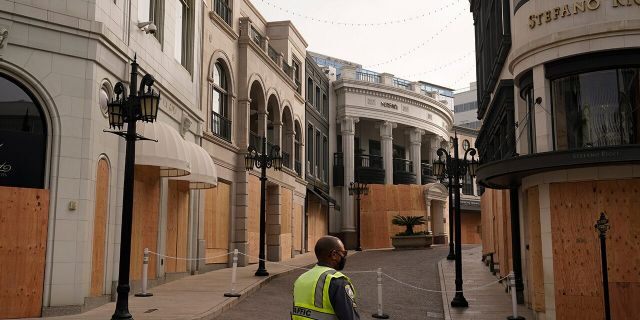 Across California, merchants are covering their doors and windows with plywood as police agencies promise a beefed-up presence on the street amid worries about the potential for demonstrations and violent responses to the general election.

Both are preparing for the long haul, anticipating that it might be days or weeks of anxiety before a victor is declared in the presidential race.

The famed Rodeo Drive of Beverly Hills was closed to cars and pedestrians starting Monday night, the eve of the election. Businesses like the Mikimoto jewelry store, Nordstrom, Tiffany and Saks Fifth Avenue have been boarded up. Some merchants painted over the wood, so the boarding would not look so conspicuous — and the city has contracted with 80 armed security guards. 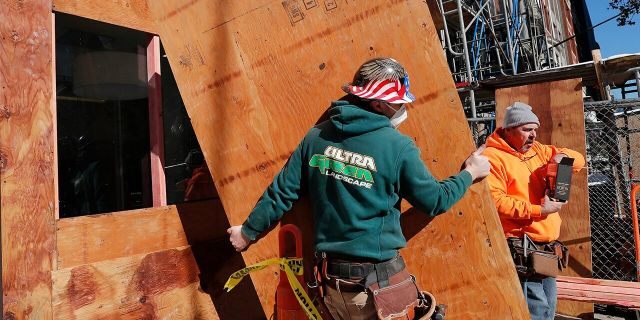 Workers board up the windows of a Santander Bank branch on Boylston Street, Oct. 31, in Boston. (AP Photo/Michael Dwyer)

“Anything’s possible, no matter who wins,” he said. “Do what you’ve got to do to keep yourself safe, your partner safe and the citizens of LA safe.”

Elsewhere, in downtown Washington, the sounds of hammers and power tools echoed through the streets Monday as workers boarded up dozens of businesses.