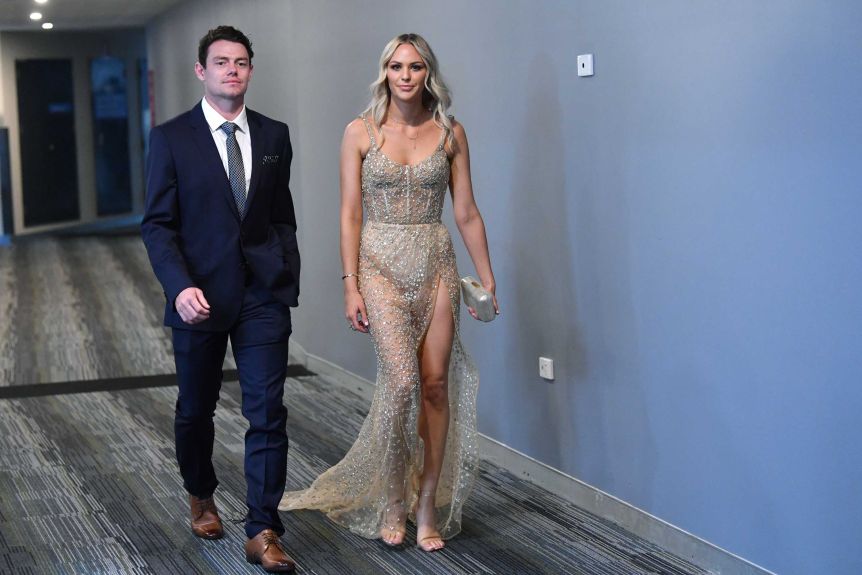 Brisbane may have missed out on a spot in the grand final, but Lions star Lachie Neale has won the Brownlow Medal as a pretty good consolation prize.

Neale polled strongly throughout the night, nabbing three votes each in four of the first five games, finishing up on a whopping 31 votes despite the season being shortened to 17 games.

He picked up three votes in 10 of the 17 games this season, with an extra vote in a round-10 loss to Richmond.

He locked up the win with two rounds to spare, with Port Adelaide’s Travis Boak finishing second on 21 votes, and Melbourne’s Christian Petracca and St Kilda’s Jack Steele tied for third on 20 votes.

Neale was an unbackable favourite heading into the count and he said it was a relief to have it over and done with.

“It’s been spoken about quite a bit. I suppose there is a sense of relief that it’s over now and I have the medal,” he said.

“There was some great players throughout the year Travis Boak, Christian Petracca and Jack Steele, even Dustin Martin and Dangerfield had great years as well.

“There were always going to be challenges, but I’m very proud to have won it this year.”

Because of COVID-19 restrictions, there were a number of smaller ceremonies across the country instead of the one big event that usually takes place during grand final week.

That meant Neale missed out on the experience of having last year’s winner and former Fremantle teammate Nat Fyfe hand him the award, but he did have some kind words to say from the other side of the country.

“You came us to at Freo as a late draft pick and from day one set about proving to the competition how good a player you could be,” Fyfe said.

“I think what you’ve done at Brisbane over the last three seasons has really turned into one of the most consistent players in the competition, an absolute superstar.

“I wish I was there to give you a big hug and put the medal around your neck. I can’t do that this year, but it’s my great pleasure to now ask you to present yourself with the 2020 Brownlow Medal.”

Check out all the glamour and drama of the night in our live blog.

Lachie Neale is the 2020 Brownlow Medallist 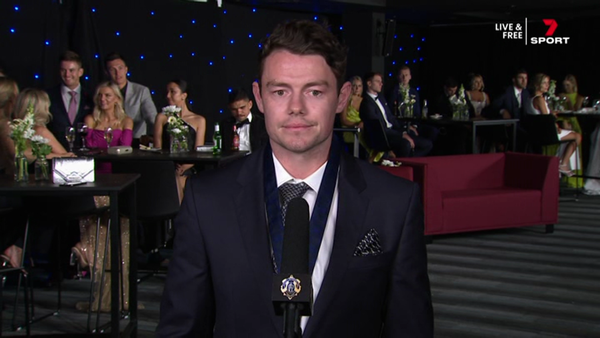 Not the biggest, not the quickest, but an absolute genius on a footy field, Neale has broken the mould for what a modern midfielder has to be. He wins the ball as well as anyone, uses it better than most, and crucially affects the scoreboard like few other midfielders in the game. He’s a craftsman, the sort of player you might not notice but upon reflection realise he had a part in everything good the Lions did.

A spectacular player, who started his career as a low draft pick, became an underrated gun at Freo but went to a whole new level when handed the keys in Brisbane. A more than deserving winner, congratulations Lachie Neale.

That’s it from this weird Brownlow

In the end it wasn’t that weird I guess. It was long, the favourite won, everyone behaved themselves. But in the end, all that matters is Lachie Neale has the medal that he quite obviously deserves.

Thanks for sticking around tonight, we’re going to have a whole stack more coming this week ahead of Saturday night’s (now THAT’S weird) grand final between Richmond and Geelong. But until then, goodnight.

Some thanks from Lachie Neale

I’m going to put almost the whole lot in here:

I suppose to start with, I’ll thank my family. My mum, Amanda, she is an amazing person, amazing woman, I’m very proud to be her son. She has done so much for me and so much for my siblings as well, supported me and my journey for a very long time. Same with my dad, Robbie. He is such a good man. I think with him our relationship has grown and developed every year and I can honestly say now he is one of my best mates, which is awesome. I thank Brett, my step-dad as well, his support for me throughout the journey has been amazing. He is such a good man and looks after our family very well.

I want to thank my wife Jules obviously. She is an amazing human being. Not many people probably know, but she owned a salon in Perth before we decided to move to Brisbane and she had to sell that to come over here and follow my dreams. She was doing very well for herself over there, but she always puts me ahead of herself when she shouldn’t have to, and she is the most selfless person I know. My biggest support. Thank you very much Jules. I love you.

To the footy club, I won’t be able to get through everyone, but the staff and the coaching staff and everyone involved in the club, especially this year in such trying times, I think we have done an amazing job and I’m so proud to be part of the organisation from where they have come from to where we are now. It’s a credit to the whole footy club and that starts at the top with Andrew Wellington and Greg Swan down to David Noble and Chris Fagan. I’m so thankful to be part of the organisation.

To our players, this award is really for the club and the playing group. Without them I definitely wouldn’t have this medal. You have to be in a pretty successful side and win a lot of games to achieve this. I thank my teammates tremendously for all their work. I love playing with them. They are a great bunch of guys.

I also want to thank the AFL and the way that they have gone about this year and getting a season out. It’s an incredible achievement, should be very proud to get the season underway and completed with one round to go.

To all our Brisbane Lions fans, apologies for last night. We didn’t play our best footy and we were beaten by a better side on the night. I feel like we are on the right track and we are heading to bigger and greater things over the next few years. Stick with us.

Brilliant outcome. Tiger supporter here and what this player has achieved make me and I hope all footy supporters feel wonderful. He is true star and makes the game really special. Congrats 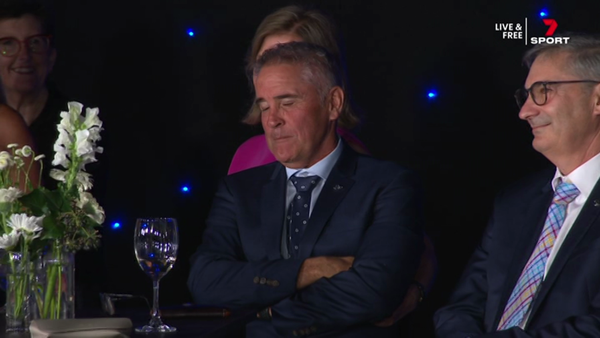 Fages is such a great man on and off the field. He calls me once or twice a week to talk about footy and life, always asking about family and friends and my interests outside of footy as well.

On the field he is a real competitor. You can see it on match day on the bench. He rides the waves with us. I’m so thankful to have him as a coach and I’ve learnt so much from him in these two years. I know I’ll continue to learn so much more because he is such a knowledgeable and great man. I couldn’t be coached by a better coach at the moment.

Votes! Lots of them, people are getting them, good for them.

Dangerfield gets up to 15 votes, as does Dusty.

Nothing for Boak in the last game of the season. Three more for Petracca and two for Steele as they tie for third with 20.

One last three vote for Lachie Neale – 31 votes in a 17-game season is flat out ridiculous. He’s our Brownlow Medallist for 2020.

Okay now Gillon is going too fast for me to keep up.

Neale doesn’t get any in this one. Boak picks up three more to go clear in second place.

Christian Petracca gets no votes, Lachie Neale has won the Brownlow.

And he does it in style! Lachie Neale takes three votes against the Suns and is officially the Brownlow Medal winner.

Okay, we think this is how Lachie Neale can win it this coming round:

I think. Maths is hard. It’ll all be over soon anyway.

Nothing for Petracca here, two for Gawn though.

Nothing for Neale either! The wait goes on. Not a lot of movement in that round.

After some more faffing, we’re ready for some more votes. Brisbane had a bye this round, so no Neale votes. But depending on how other things fall, he might only be one more game away.

Another vote for Cam Guthrie, while Patrick Dangerfield has some late ones. One for Steele and three for Petracca will extend Neale’s wait.

Cam Guthrie is up to 12 votes.

Jack Steele takes two from the game against Brisbane, but Neale doesn’t pole any.

Travis Boak has three votes too to move back into second.

In a big win over Collingwood, Christian Petracca takes three more votes to move up to 14.

But never mind, Lachie Neale has three more votes and is remarkably getting close to locking this up.

To be honest I didn’t get past his shoes to notice. I’ll need some pictoral evidence, but yeah… that would rival the cane for top Brownlow Fyfery.

Christian Petracca is back in business with three votes, while Boak picks up two more.

And there’s another three votes for Lachie Neale. Yeah, this one is over.

We’re back to the votes after a lengthy hiatus.

No votes for Gawn or Petracca this time, and none for Boak either.

One vote for Neale, his best-on streak is over. Dustin Martin is up to 10 now.

Jack Steele is having a dip! Three votes takes him to 13.

Goal of the year time

What do we reckon here?

And the winner is:

Josh Daicos! Fair enough too, anyone watching that on the night knew they’d just seen the GOTY.

We’re in another ad break, so have some random Travis Boak highlights.