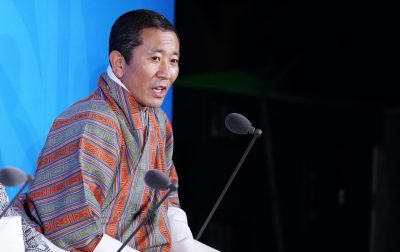 Landlocked and inextricably linked to India (the country with the second most COVID-19 cases in the world), neighbouring Bhutan’s chances of avoiding the ravages of the pandemic appeared slim. But on 25 October 2020, the government reported only 358 cases, 333 recovered and no deaths. The country’s performance in dealing with COVID-19 has been hailed ‘commendable’ by the World Health Organization (WHO).

The leadership triumvirate of the Prime Minister, Health Minister and King played a major role in this success story. Prime Minister Lotay Tshering is a physician and Health Minister Dechen Wangmo has a long history in public health. They based their policy responses on science and both understand what is required for effective disease control. Their rapid and well-informed decision-making was strongly supported by the King, who has been highly visible and vocal in backing the messages from Tshering and Wangmo.

Leadership needs to be complemented by good management for COVID-19 measures to be effective and the government’s speed of action is notable. When the first case — a US tourist — was identified on 6 March, government officials immediately restricted entry for foreign visitors. And when a woman who had been released from quarantine tested positive on 10 August, officials promptly initiated a national lockdown and contact tracing.

Bhutan exercised maximum effort to prevent community transmission. The country has recorded a high rate of testing. Tests and quarantine facilities are free, which encourages people to come forward for testing or present themselves for quarantine.

Other evidence of good management was the chartering of planes and the rapid establishment of quarantine facilities for returning Bhutanese citizens, and the quick announcement of loans and relief measures. The army was recruited to assist in the construction of living quarters for returning Bhutanese citizens who are normally residents across the border in the Indian town of Jaigaon.

Communication from the government is consistently clear, concise and authoritative. There are daily updates, contact numbers and other specific information for citizens, government agencies and would-be travellers. High levels of trust in government and a record of compliance with government directives aided efforts to contain the virus.

Preparedness was another important feature of Bhutan’s COVID-19 response. The foundation  was the country’s universal health care system, which facilitated timely diagnosis and treatment. The system’s logistics and supply chains also enabled greater security, efficiency and the dissemination of equipment needed for the prevention and containment of the virus. A National Preparedness and Response Plan, for instance, was drafted in February 2020. And in November 2019, with uncanny prescience, the WHO and Health Ministry conducted a simulation exercise at Paro Airport — the country’s only international air gateway — to deal with the arrival of persons infected with a new strain of coronavirus.

Community strength is the final element in Bhutan’s effective COVID-19 response, with the King, government and community acting in concert. The King demonstrated concern and fulfilled his traditional role as monarch by distributing kidu (wellbeing), a system involving the royal provision of resources to the needy. In the case of COVID-19, kidu came in the form of income support to 23,000 individuals. Members of parliament donated one month’s salary, hoteliers offered premises for quarantine, businesses donated cash and farmers donated food.

Several thousand desuups (guardians of peace), members of a volunteer organisation established by the previous King in 2011, also played an important role. Easily identifiable by their orange uniform and trained in disaster relief, desuups could be seen patrolling the southern border, ensuring compliance with lockdown, helping medical staff, delivering essential supplies and more. They were representative of a national belief that managing COVID-19 is a civic responsibility.

But there is a downside — the economy. Bhutan has a strong record of sustained economic growth and welfare improvement but the pandemic measures are having a damaging impact. Compared to a respectable 4.4 per cent growth rate in 2019, the latest estimate from Bhutan’s Finance Minister for 2020 is negative 2.1 per cent.

The industry most affected is tourism, the country’s largest source of revenue after hydropower. Sealing the borders shut down the tourist industry overnight, affecting 50,000 workers. They comprise 16 per cent of the economically active population and their loss of livelihood is estimated to have adversely affected 150,000 people in a country of 750,000. The demise of the tourist industry is contributing to a steep decline in government revenue.

Some additional funds to plug the fiscal gap were raised through Bhutan’s first government bond offering and the welcome rise in electricity export sales — up 14 per cent as of August 2020. But there are further hold-ups for the already delayed work on new hydropower projects as well as construction work more generally. Despite additional aid from donors, the government was forced to review and ‘reprioritise’ activities in the 12th Five Year Plan (2018–2023). There is also talk of diversifying the economy and increasing mineral exports. Such measures will take time. Meanwhile, unemployment — particularly for youth — continues to rise.

The general view is that there is ‘a long way to recovery’. But it could have been much longer without effective COVID-19 containment measures.

Mark Turner is Honorary Professor at the School of Business, University of New South Wales, Canberra.