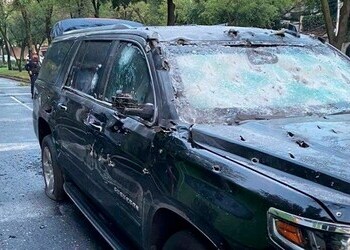 The ambush of Mexico City’s police chief by heavily armed gunmen has been described by authorities as a failed assassination attempt by the powerful Jalisco Cartel, renewing doubts about the government’s capacity to stop the country’s continuous wave of violence.

On the morning of June 26, Omar García Harfuch, Mexico City’s public security secretary, was shot and injured in an attack on his vehicle on central Reforma Avenue, in an upscale neighborhood. Two of his bodyguards and a woman driving by died in the shooting.

García Harfuch, who apparently was shot three times, wrote on Twitter from his hospital bed that one of the country’s most powerful organized crime groups, the Jalisco Cartel New Generation (Cartel Jalisco Nueva Generación – CJNG), was behind the “cowardly” attack.

At a press conference, Mexico City Mayor Claudia Sheinbaum announced that 12 suspects in the shooting had been detained, one of whom authorities identified as José Armando “N”, alias “Vaca,” a leader of a CJNG cell in the city of Tonalá in the western state of Jalisco. He was acting under the orders of a senior commander in the group, Carlos Andrés Rivera Varela, alias “Morro,” authorities said.

SEE ALSO: Why the Jalisco Cartel Does Not Dominate Mexico’s Cartel Landscape

Security camera footage released on social media showed a group of men arming themselves on top of a truck shortly before the attack.

Photos published by Mexican media reportedly showed the weapons used to include high-powered assault rifles, fragmentation grenades and a semiautomatic .50 caliber Barrett sniper rifle — a firearm carried by military forces around the world, including US special forces, but considered hard to obtain in Mexico.

Óscar Balderas, a Mexican journalist specialized in covering organized crime, wrote on Twitter that the CJNG had used this type of heavy weaponry at least once before, during 2015 attack that left 15 policemen dead.

A number of commentators and journalists said the government was aware of threats made by the CJNG against García Harfuch and other public officials.

Mexico has suffered a recent string of shocking displays of violence, including the massacre of a Mormon family in Sonora state and the freeing of Ovidio Guzmán López, son of Sinaloa Cartel kingpin Guzmán Loera, alias “El Chapo,” amid a massive gun battle in the city of Culiacán. Such bloodshed, however, is not often seen in the country’s capital. The last time violence caused such alarm in Mexico City was in June 2018, when a fight between La Unión Tepito and a rival gang saw dismembered bodies left along Insurgentes, a major thoroughfare.

While the CJNG has been involved in extreme acts of violence in the past, the targeting of a senior security official in Mexico City marks a major ramping up of its attempts to claim a space in the capital’s criminal landscape.

In May, InSight Crime reported that, while CJNG is Mexico’s primary criminal threat overall, it has not developed a strong presence in the capital. According to Balderas, the group operates mainly in Mexico City’s poorer neighborhoods.

The attack against García Harfuch could indicate this is about to change. The scale of the attack and the weaponry used point to a level of sophistication that few criminal groups in Mexico possess. And it comes after a number of notable attacks on politicians and judicial officials.

Alejandro Hope, a Mexican security analyst, called the attack on the police chief an “exceptional event.” Until now, “nobody had dared to face off with Mexico City police,” he told InSight Crime.

Hope said it too early to determine the motive behind the attack. He added that targeting García Harfuch might not have been a calculated strategic move by the CJNG but the result of bad decisions.

Such public displays of violence, which generate massive media coverage, are part of the CJNG’s modus operandi. In 2015, the group killed 15 policemen in an ambush and later shot down a military helicopter in the state of Jalisco. In 2018, CJNG members kidnapped and murdered two agents from the organized crime unit of Mexico’s Attorney General’s Office but not before they filmed a video in which the agents were made to criticize the country’s security policy.

The attack on Harfuch comes after a number of brazen killings of public figures. Two recent incidents in the state of Colima have made headlines. On June 16, hitmen killed Uriel Villegas Ortiz, a Colima federal judge, and his wife, Verónica Barajas. While responsibility for the shooting has not been established, Villegas Ortiz had issued judgments in several cases involving members of the Jalisco Cartel New Generation (Cartel Jalisco Nueva Generación – CJNG) and Sinaloa Cartel. A few weeks prior, lawmaker Anel Bueno was kidnapped and murdered.

In recent years, political assassinations have become commonplace. In 2018, a major election year, a record 37 mayors, former mayors or mayoral candidates were killed, often due to their connections to organized crime or for trying to stand up to criminal groups.

But the assassination attempt of García Harfuch is on another scale altogether. Whether the CJNG is responsible or not, this attack is openly defiant of the government of President López Obrador, whose 18 months in office have been marked by a record number of homicides and the lack of any clear security policy.