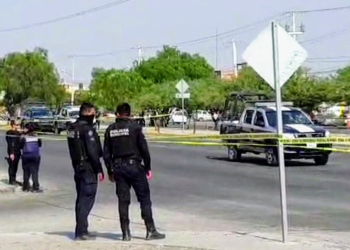 Two municipal police officers, Omar Nieves and Noemí Esperanza, were on routine patrol, sitting in traffic in broad daylight on a highway in northern Celaya, when a small car pulled alongside their pick-up. Several gunshots were fired, and Nieves and Esperanza became two more officers murdered in Mexico.

So far this year, at least 215 police officers have been killed across the country, or more than one a day, according to data from the civil society organization Causa en Común. The central state of Guanajuato, where Nieves and Esperanza were gunned down on May 19, has recorded the most police killings over the last two years and is on pace to do so again in 2020.

If the current trend holds, more than 500 members of Mexico’s police force will be murdered this year alone, exceeding the 446 officers killed throughout 2019. The year before that, 452 officers were murdered. Year after year, the majority of those killed are municipal-level cops.

The front lines of the fight against organized crime groups have become increasingly deadly for local forces. For comparison, when combined, the federal police, armed forces, navy and Attorney General’s Office saw an average of about 120 officials killed annually during  conflicts with criminal groups between 2006 and 2016.

The police murders come amid a broader spike in homicides in Mexico. Authorities have tallied record levels of murders in each of the last three years. And this year looks to be no different after 11,535 murders were recorded during the first four months of 2020, putting the country on track to break last year’s record total.

Mexico’s President Andrés Manuel López Obrador, better known as AMLO, has come under extreme pressure to stem the bloodshed, primarily attributed to crime groups. To do this, he has put his support behind the new National Guard, rather than attending to the country’s beleaguered police force, which is in dire need of attention and reform.

This is reflected in the lack of resources, training and technology, and the sub-standard pay officers receive.

On average, a Mexican state police officer earns 12,800 pesos per month (about $550), according to government data reported by Cuestione. The lowest-paid officers in Tabasco state receive about half that per month, while the highest paid officers in San Luis Potosí state earn almost double the national average. The salaries of municipal officers are often even lower than state police.

Without a clearly defined role, Mexico’s local police forces have been left adrift and forced to fend for themselves with scarce resources.

“There’s absolutely an identity crisis,” Manelich Castilla, Mexico’s federal police commissioner from 2016 to 2018, told InSight Crime. “There’s no continuity in the trajectory of being a police officer.”

The government’s longstanding inability to figure out how municipal police fit into the overall scheme of providing security and the inherent mistrust and hostility towards them — from the highest levels of government on down to local residents — impedes any chance for them to be effective, according to Jaime López, a security policy consultant and former police official.

A lack of political will has exacerbated the problem. Consecutive administrations have paid plenty of lip service to reforming the country’s police force, but have instead thrown resources towards other militarized units deemed more worthy, most recently the National Guard, which has functioned more as a glorified immigration force.

At the same time, residents trust in the local police officers has severely eroded.

SEE ALSO: What’s Standing in the Way of Police Reform in Mexico?

According to a National Institute of Statistics and Geography (Instituto Nacional de Estadística y Geografía – INEGI) April 2020 public security survey of 25,500 households in 70 cities across Mexico’s 31 states and the capital, less than half of those polled had confidence in the local police.

Another INEGI report, which gauged government quality and impact through a poll of more than 100,000 residents in 2019, found that just over a quarter of those surveyed were satisfied with the services police provided. About 30 percent said they felt police contributed to a positive sense of security in communities.

Over the years, the job of an officer has only become more dangerous. Several experts consulted by InSight Crime pointed to two reasons for the current uptick in police killings: widespread insecurity and outright impunity.

“It’s no surprise that police officers in Mexico are frequently being killed,” said Lilian Chapa, senior researcher at the World Justice Project. “There are no guarantees that a police killing — or any killing — will be solved.”

There’s a widely held belief that local cops are killed because of ties they may have to criminal activity. While that may be true in some cases, experts warned that municipal forces may very well be killed just for trying to do their jobs. Add to this an utter lack of institutional support, and the job of a municipal police officer is “completely frustrating,” according to Castilla, the former police commissioner.

Not only that, but “this perception that they had it coming helps fuel this context of impunity,” according to Cecilia Farfán-Méndez, the head of Security Research Programs for the Center for US-Mexican Studies at the University of California, San Diego.

Unfortunately, police reform looks to be off the table for the remainder of López Obrador’s time in office. Mexico’s armed forces have for years played an outsized role in domestic security, and a new decree signed by the president May 11 will ensure that continues until at least 2024.

Castilla called the decree the “perfect storm” for violence against police and impunity in  their killings to continue in Mexico.

“There’s no strengthening of the capacity of the police alongside the extension of the armed forces’ role in public security,” he told InSight Crime. “[The decree] hasn’t been accompanied by anything to support the civilian police.”

While the federal government has again put police reform on the back-burner, others are taking it upon themselves to not just ask what’s wrong with policing but how to improve it.

Jorge Amador, the former sociology professor-turned-police chief of Ciudad Neza in the State of Mexico, has changed the mentality of policing to be more of a civic duty rather than simply a way of earning money. This strategy has helped turn his local squad into one of the country’s most effective and trusted.

“For us, security comes from bringing society closer together, from a closer relationship between the people and their institutions,” he told the BBC in 2018.

Now, officers in Ciudad Neza are using advanced camera technology to monitor the city, establishing neighborhood watch groups and holding nightly meetings with community members to give them a voice. All of this is to “challenge this idea that police in Mexico are corrupt, inefficient, criminal, [and] abusive,” according to Amador.

For the time being, however, Ciudad Neza’s police force remains an anomaly, as political leaders struggle to seriously consider what the role of the police should be in representing the state and serving the civilian population.

“What we have now is an institution that hasn’t really ever evolved,” Chapa told InSight Crime. “Mexico has 21st-century problems but an antiquated police force.”