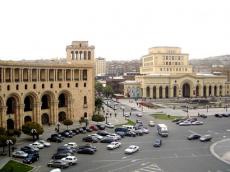 After the collapse of the USSR, maintaining influence in the post-Soviet space has always been considered one of the main priorities of the Russian Federation.

The plans to destroy Russia as the largest and richest (in terms of natural resources) state in the world, according to Moscow, have not disappeared, and the post-Soviet republics are a kind of the last geographic (geopolitical) frontier protecting Russia from a potentially hostile space (NATO). Therefore, stability in the former Soviet republics bordering on Russia is an important condition for ensuring the security of Russia itself, and one of the tasks of its foreign policy.

Recently, new circumstances have emerged that may pose a potential threat to stability of not only the South Caucasus, but also Russia. Planes flying from Beirut with Lebanese Armenians on board arrived in Yerevan. According to the regional media outlets, their settlement in Nagorno Karabakh has begun.

Judging by the way the plotters of the Armenian far-fetched moves are accustomed to act, at the initial stage everything looks rather harmless – as a purely humanitarian action and care for compatriots.

However, coupled with plans to build roads and infrastructure, as well as residential settlements directly in the occupied territories (especially, Gubadli, Zangilan and Kalbajar districts of Azerbaijan), satellite images of which were recently provided by Azercosmos, it becomes obvious that the settlement of Armenians there is a deliberately planned powerful irritant factor for Azerbaijan.

Why is all this being done?

The background is not immediately apparent. The main goal is not only the occupied territories of Azerbaijan, which the Armenians finally decided not to return, but Russia. Such conclusion can be explained.

The terrible explosion in Lebanon’s capital Beirut, according to the Armenian media outlets, left 13 Armenians killed and 300 wounded. But, this doesn’t look like a reason to promptly leave one’s habitual place. Nobody, except for the Armenians, began to leave Lebanon, especially since the aid was being provided, and the EU, on behalf of France and Germany, guaranteed the provision of significant financial support to the Lebanese government.

While the rate of migration of the population from Armenia itself remains consistently high, the resettlement of the Lebanese Armenians looks more than strange. It’s very difficult to believe in the sincerity of even the poorest sober-minded Lebanese Armenian, who decided to snap and move to a completely devastated foreign territory, where bullets are flying, and which he will sooner or later lose.

The change in climate, lifestyle, field of activity (Lebanese Armenians are mostly not farmers) hardly counts as the search for a better life, as it was during the development of America.

What is it then?

Yes, changing the demographic balance in Nagorno Karabakh or the arrival there under the guise of migrants of Armenian militants from Lebanon (and other Middle Eastern countries) to conduct hostilities, as many analysts write, are also the goal of the Armenians, but these are tactical goals.

The resettlement of Lebanese (and before that Syrian) Armenians in Nagorno Karabakh means the emergence of an alien Middle Eastern element in the South Caucasus and the transfer of Middle Eastern ties, including terrorist ones, to the post-Soviet space.

Armenia has been tasked to turn the Caucasus into a second Middle East. The strategic goal is the destabilization and collapse of Russia.

The absence of an immediate response from the international community to the settlement of the occupied Azerbaijani territories, which is a direct violation of international laws, gives one more reason to assume that this is not a spontaneous process, and that there is a powerful force behind it, which gave the command not to take serious actions against Armenia.

The calculation is unmistakable: Azerbaijan will not silently observe the illegal settlement of its historically and legally recognized territories, and sooner or later will sharp reaction to the actions of Armenia, using its right to liberate the occupied territories. This will be the beginning of a series of tragic events and, as a result, complete destabilization of the situation in the South Caucasus. Further, it’s quite likely that the fire of the war will also affect the Russian North Caucasus.

A big war on the borders of Russia or already on its border territories is what the West needs. At the same time, the goal will be achieved to put Russia and Turkey on opposite sides of the barricades, since their cooperation is the Achilles’ heel of the West.

The conflict in Nagorno Karabakh was the first destructive impetus to the collapse of the Soviet Union.

Now a similar scenario may be realized once again. Armenia is fulfilling a new order of overseas patrons – to kindle the fire of a big war in the Caucasus region.

One can ask: what is the benefit of this for Armenia?

The Armenians are sure, or rather, they were convinced that after the collapse of Russia, they will be helped to change again the borders in the region and finally become “Great Armenia”.

Connect with us. Get latest news and updates.