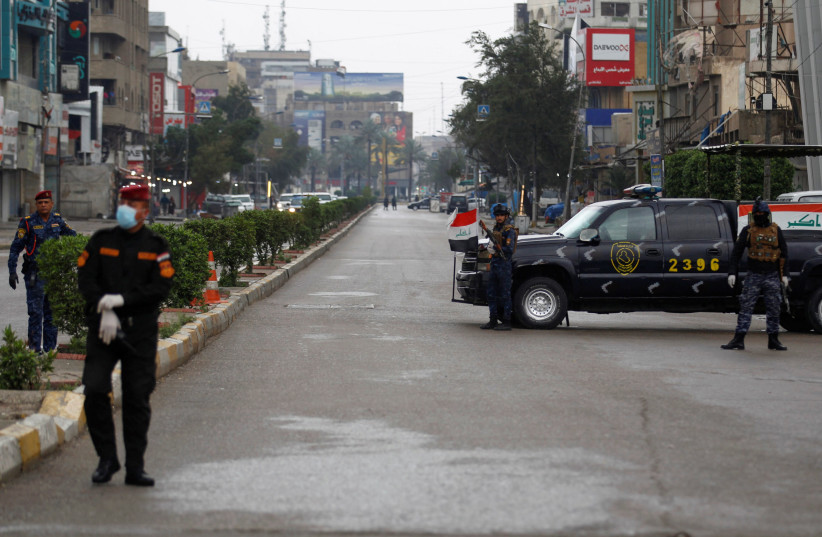 The battle against the coronavirus is as important as the struggle against Israel, an online poster put up by the Palestinian Mujahideen Brigades said on Wednesday. They are one of many groups in the Middle East who claim to have swapped their AK-47s for disinfectant during the global pandemic.

The first cases of coronavirus in the Gaza Strip this week have worried the Hamas leadership. They are now concerned it could spread to the congested cities they govern and overwhelm the already weakened health sector in the blockaded strip. Hamas has put out videos of their fighters holding hoses rather than rockets and spraying what they claim is disinfectant on party offices and streets.

The Mujahideen brigades are a small Gaza-based group that has put out several videos in recent months, according to research by Joe Truzman at The Foundation for Defense of Democracy’s Long War Journal. Now they are working with Hamas to stop the virus.
Palestinian Islamic Jihad, which is supported by Iran, is also joining the battle against the pandemic. “We are prepared for everything,” the group says, with an image copied from Iran that shows a man who is half soldier, half doctor. Like the Islamic Revolutionary Guard Corps in Iran, which has taken a lead in fighting a “biological war” against the virus, the Islamic Jihadists also want to show they can put up scrubs.

Claiming that we are “at war” with #COVID2019 is not a prerogative of Western politicians. The Islamic Jihad Movement in #Gaza, an organization designated as terrorists inter alia by the US and the EU, puts it this way: “We are prepared in every arena.” #coronavirus #Jihad pic.twitter.com/BkOWzssAoY

Hezbollah in Lebanon is also sending aid to the frontline. It hopes to resist the virus in Lebanon through more than $1 million in donations, and sending ambulances, 1,500 doctors and more than 3,000 nurses and medical personnel to volunteer and help against the pandemic. Hezbollah is helped by its influence over the Health Ministry in Lebanon and using the resources of a state within a state. Proficient in stockpiling weapons in warehouses, precision guidance and tunneling, the group says it hopes to use its expertise for a “huge plan” to fight the virus, according to Al-Manar media.
In Iraq the pro-Iranian proxy group Asaib Ahl al-Haq is also involved in a campaign to disinfect Baghdad. Previously accused of suppressing protests it has turned its expertise of suppressing the  virus. Kataib Hezbollah, another group in Iraq that is linked to Iran is not as focused. It says it is too busy monitoring US troop movements. However on March 24 an officer linked to the group said it would assist at five hospitals in Iraq. Harakat Hezbollah al-Nujaba and the Hashd al-Shaabi or Popular Mobilization Units of which it is apart is also doing an awareness campaign in Ramadi about the virus.
Other terrorist groups in the region have also warned about the virus. ISIS advises its members not to go to Europe. Hayat Tahrir  al-Sham in Idlib province in northern Syria, a group linked to Al-Qaeda in the past, has reportedly detained a preacher to prevent gatherings that could spread the virus. Other groups such as the Taliban are apparently prepared to listen to advice from health care workers and have expressed concern about prisoners. Hamas is also worried about its prisoners. Meanwhile the Iranian-backed Houthis in Yemen had sought to close the Sana’a airport to UN travelers due to high rates of infection in Europe.
Not all militant and terrorist groups care about the pandemic. In parts of the Sahel, terrorist groups linked to Boko Haram and others have carried out increased attacks. This swath of ungoverned territory from the borders of Chad to Niger and beyond is a concern because the virus and extremist groups easily exploit it. Nevertheless armed groups across the Middle East, many of them unable to test for the virus and lacking medical support, are picking up the disinfectant alongside the rifle, preparing for what they know is a looming threat. This has the affect of shifting their attention from fighting their various enemies, whether it is Iranian proxies aiming rockets at US forces in Iraq, or Hamas targeting Israel. Hamas wants aid from Turkey or Qatar as it worries about the pandemic.
Please follow and like us: