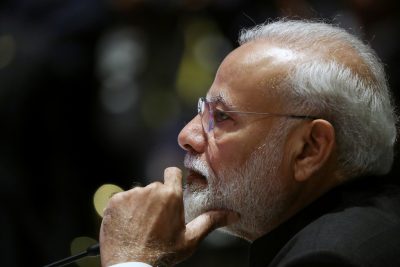 The Indian government is under massive pressure to retaliate for the deaths of Indian soldiers in a border clash with China. While some bilateral measures may be unavoidable, India’s broader interest is not to reduce its engagement with China.

In an important address to the nation on 12 May 2020, Prime Minister Narendra Modi articulated his vision of a ‘self-reliant’ India — engaged with the world but dedicated to using domestic resources to meet domestic needs. The speech was delivered as India was dealing with the enormous medical, economic and humanitarian impacts of the COVID-19 pandemic. Modi offered a vision of India’s economic future which would differ from the commitment to liberal global integration espoused by New Delhi over the last 30 years.

India had been reassessing its global economic engagement since Modi’s electoral triumph in May 2019, which saw his Bharatiya Janata Party (BJP) return to power with a rare absolute majority. Driving this reassessment was slowing economic growth and poor export performance in the run-up to the election. This performance revived the strong tradition of economic nationalism in the BJP. Central to the review was the economic and strategic relationship with China.

Even as Modi spoke, trouble was brewing along the arc of India’s border with China. The two sides had managed to maintain an uneasy peace for 40 years but a border clash on 15 June in the Ladakh sector led to the deaths of 20 Indian soldiers. As both governments work to defuse the situation, the loss of military lives is amplifying earlier calls for India to reduce its economic engagement with China.

From rough parity 30 years ago, the Chinese economy is now five times as large as India’s (when measured in US dollars at current market prices). China looms large in Indian trade and investment but the reverse is much less the case — though the potential scale of the market and India’s capacity for innovation have been a draw for Chinese companies.

India actively encouraged Chinese trade and investment flows but it was not able to get official redress on long-standing concerns about a large imbalance in trade in goods and barriers to market access for exports in services where it is more competitive.

The persistence of this imbalance has led to accusations that China’s trade goals are mercantilist, state-led and predatory. These concerns prompted India to invoke remedies available to it under the World Trade Organization (WTO).

Indian security analysts criticised the government for permitting China to ‘hollow out’ India’s already weak manufacturing sector and accused the government of ‘appeasement’ in its attempts to lure Chinese capital. Despite these criticisms, Modi invested substantial political capital in ties with Chinese President Xi Jinping, including working visits in both directions.

An important marker of New Delhi’s deepening concerns was the decision announced by Modi while at a summit in Bangkok in November 2019 that India would not participate in the final negotiations of the Regional Comprehensive Economic Partnership (RCEP). Press reports indicate that the Indian government lacked domestic political support for an agreement that included China.

More recently, India has put in place regulatory restrictions on portfolio investment by Chinese companies in Indian-domiciled firms. And in its first significant action since the clash, the Indian government invoked concerns on privacy and national security to block 59 mobile apps originating in China. For many of these the Indian market is already as important as the Chinese, and is an important factor sustaining their market valuations.

As diplomatic efforts continue on the military front, what should guide India’s economic stance towards China at this crucial juncture? Three assumptions guide our thinking.

Both sides will prevent the unfortunate encounter at Ladakh from tipping into war and wish to maintain the separation of the security and economic spheres that prevailed up to now.

The limited trust the Indian public had in China’s word has now entirely eroded. This is now the political reality for the Modi government.

Despite the aggressiveness of Chinese behaviour in other parts of Asia — economically and militarily — the Indian leadership is not about to condemn China as an economic pariah.

India has the scale and sophistication to recalibrate its economic relationship with China such that deeper interdependence reduces, rather than increases, New Delhi’s economic vulnerability.

For India, business-as-usual is even less a politically realistic option than it was before Modi’s 12 May speech.

If India wishes to maintain distance from both the United States and China, then its best option is to engage with coalitions of ‘middle powers’ that share some of India’s concerns on the non-market behaviour of Chinese entities while maintaining commercial contact with China.

Europe has been working (with the WTO) to develop disciplines on state-owned enterprises and investments in strategic sectors without imposing blanket bans, though similar disciplines may then be imposed on India in its negotiations with the European Union. Were India to reconsider engaging with RCEP, this would allow it to cooperate with Japan, Australia and South Korea in fashioning relevant rules.

As the saying goes, for things to stay the same, everything needs to change. Deaths at the Ladakh border may require the Modi government to rethink its path to self-reliance.

Suman Bery is a non-resident fellow at the Brussels-based think tank Bruegel and a Global Fellow at the Woodrow Wilson International Center for Scholars.

Alicia Garcia-Herrero is Chief Economist for the Asia Pacific at Natixis and a senior fellow at Bruegel.