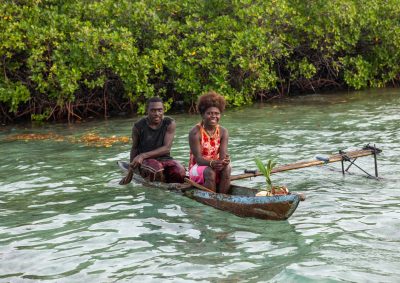 Gender-based violence (GBV) is a wicked policy problem that plagues governments across the world. Papua New Guinea (PNG) is no exception and has some of the highest rates of violence against women globally.

For decades, grassroots activists and development actors have thrown their hands up in the air at the lack of national leadership on the issue in PNG. Despite an absence of political will at the highest levels, champions have emerged in a handful of provinces and some progress has been made towards more coordinated sector responses in urban areas.

Over the past year, an unprecedented series of events has taken place in the GBV policy space in PNG. A bipartisan ‘Coalition of Parliamentarians Against GBV’ was formed following a ‘High Level Meeting on GBV’ in August 2020. The Coalition includes 20 of PNG’s 111 (all male) members of parliament and has been active on social media and in declaring their commitment to support change.

Subsequently in November 2020, the ‘First Annual Summit on Ending GBV in PNG’ was held and a Special Parliamentary Committee to ‘inquire into issues related to GBV’ was established. The Committee comprises seven members of parliament. It opened its inquiry in May 2021 with a call for written submissions and two days of public hearings at Port Moresby’s iconic APEC Haus.

Selected frontline workers, government officials and even the current Ministers for Treasury, Police and Community Development and Religion appeared before the Committee. The experience was uncomfortable for many public servants and politicians who were clearly not used to being interrogated about their areas of responsibility. The process provided insight into the lack of accountability mechanisms in the PNG public sector more generally.

The hearings elicited mixed emotions; viewers shared their experiences of elation, frustration and anger on social media in response to the sometimes inspirational and sometimes cringe-worthy testimonies. Those testifying could do so in person or via Zoom from different parts of PNG. The  proceedings were broadcasted live on Facebook and on big screens across the nation’s capital, Port Moresby. The accessibility of the hearings was another first for PNG.

Some may feel the attention given to GBV by some of PNG’s most influential parliamentarians is nothing short of a miracle. But it’s no coincidence that the political appetite for change has coincided with the UN’s ‘Spotlight Initiative to eliminate violence against women and girls’ which was launched in PNG in March 2020. The initiative is a partnership between the European Union and the United Nations with a funding envelope of €500 million (US$594 million), €22 million (US$26 million) of which is allocated for PNG. One activity in the program document is to set up a parliamentary committee on GBV.

The Spotlight Initiative has been received in PNG with fanfare at the highest levels. But some PNG civil society actors have criticised it as being too top-down and not sufficiently tailored to the PNG context. For example, the program outcomes, outputs and indicators are the same for all countries where it is being implemented.

Papua New Guineans have been calling for locally lead solutions to development issues and it could be argued that this donor-funded inquiry flies in the face of that ideal. Despite this, few would disagree that the inquiry represents a turning point for how GBV is dealt with at the national level in PNG.

The challenge now will be implementing the recommendations. This is no easy feat in a nation where the majority of the population lives in rural and remote areas, where services are non-existent or difficult to access and where justice is generally administered at the community level. It’s easy to be disheartened when, in addition to these constraints, there is little money in the government coffers and service delivery is subject to corruption.

The Committee will be keen to ensure that its report doesn’t suffer the same fate as the National Strategy to Prevent and Respond to GBV 2016-2025, which has done little but collect dust since it was approved by the government in December 2016.

Despite the challenges, it is important to recognise that PNG has never had this level of leadership on GBV. The police and justice system have officially been put on notice. There is a sense of optimism that, finally, politicians are listening.

Some will say that an externally funded parliamentary inquiry is not a satisfactory solution, but most will concede that it’s a better alternative to the leadership vacuum that has persisted for too long.

There have been a lot of firsts for GBV in PNG in the past year. While some people are cynical and don’t believe that Papua New Guinean politicians are capable of anything other than self-serving political manoeuvring, others hold out hope that this is the beginning of real and lasting change.

Lindy Kanan is a Senior Research Officer in the Department of Pacific Affairs at the Australian National University.

October 19, 2021Comments Off on Portuguese Police Seize 5 tons of Cocaine Worth $232 million from Yacht in Atlantic Ocean

by The Daily US News October 19, 2021Comments Off on America Is In Crisis And House Democrats Are Doing Nothing To Address The Problems

October 19, 2021Comments Off on Portuguese Police Seize 5 tons of Cocaine Worth $232 million from Yacht in Atlantic Ocean
Advertise Here for only $299 mo.
Unlimited cpc
Adspace ID5

Second Quad? Exciting opportunities await India in Middle East, but not without risks